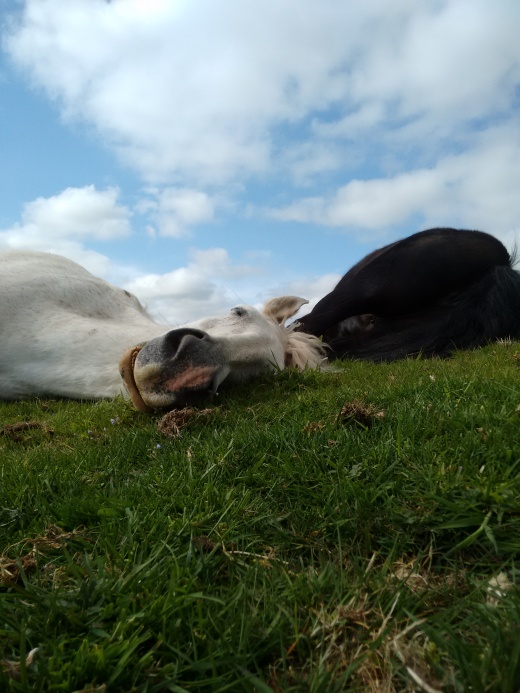 Time for a snooze…

Have you ever been on a long haul flight? My longest trip was from Scotland to New Zealand (and back!). A plane from Glasgow to London, then London to Singapore, and finally Singapore to Auckland. It’s an hour from Glasgow to London. It’s a bit boring, but if you have a good book, you can manage not to notice the time passing. You get a chance to wander around Heathrow airport and stretch your legs, before you get loaded into the plane to Singapore, they close the doors and the plane takes to the air. Suddenly, you have the awful realisation that you are stuck in this metal box in the sky for the next 13 hours.

We don’t normally notice 13 hours passing – we get up in the morning, get dressed, have breakfast, visit and maybe ride our horses, have showers, baths, lunches, dinners, commutes, work, housework, meet friends, talk to people, move around, see things, do things… Half seven in the morning to half eight in the evening we are quite occupied and time mostly passes without our being aware of it. Sometimes, we get a bit impatient, because something takes longer than it should: I will tap my feet impatiently and check my watch a lot if my regular train is delayed for 5 minutes. If the internet at work is a bit slow, I will whinge a bit while I wait for pages to load.

We have ways to deal with this. What we suddenly realise we don’t have, once we’re trapped inside a plane on the way to Singapore, is ways to deal with being stuck in the same place, with the same people, mostly in the same seat for 13 hours. None of the usual things are there to tell us the time is passing. The first few hours aren’t too bad – we do our “on a plane” routine – read a book, have something to drink, do a few Sudoku. Then we enter a sort of limbo. We’re tired of our book. We’re annoyed by the people in the row behind. The airline food is uninteresting. You can’t see anything out the window. It’s starting to be rather horrible: and there’s still 10 hours to go.

My research area, back 10 years ago when I was doing research, was about how the information that gets to our brain from our eyes helps us be accurate and coordinated when we move around. It was inspired by a group of psychologists who included a Swedish gentleman called Gunnar Johannsen. Gunnar was responsible for what I think is the nicest opening sentences of any PhD thesis:

Outside stands a weeping birch with its scanty foliage; its pliant branches moving rapidly backwards and forwards in the strong wind; each branch keeping its own peculiar rhythm. This is an example of unceasing motion, unceasing change. Motion is perhaps the most essential form of continual change that our perception gives us.”

Gunnar was interested in movement. Both the movement of things around us, as well as our own movement in the world, allow us to work out where we are, how fast we’re moving and how long things take. He said “there is no perception of time, only events”. He believed that we understand time passing through our constant awareness of things happening in the world around us. We know how many steps from bedroom to bathroom, we know we can get up, shower, brush our teeth, dry our hair, get dressed, eat breakfast and still be in time for the train. We use predictable events in the world to know how time passes. On a long haul flight, we are disconnected from these things, so the time we don’t notice passing at home seems to last forever.

Horses are creatures of motion. They spend most of their lives walking, nibbling, chewing, walking, nibbling, chewing. They create their own little clock that helps them measure time, and that clock depends to a huge extent on movement. Brain research into the perception of time shows that the parts of the brain that help us judge how soon something will happen are controlled by the parts of the brain that control movement. Horses’ brains are smaller than humans, but there’s a specific part of the brain, called the cerebellum, that’s larger in horses than in humans. Movement is one of its roles, but it also seems to be very important in judging time: these two things are closely linked.

Imagine then, a horse who spends 12 hours a day in a 12 x 12 foot box – yet only needs two or three hours sleep out of 24 hours. Compare her to another horse, who spends his life outside in a herd. The first horse sees nothing but the walls, and occasional but unpredictable passers by. Like us on the aircraft, food is provided. Like us on the aircraft, it does little to relieve the frustration of being stuck, not being able to walk, nibble, chew, walk, nibble, chew while observing the environment we’re passing through. There’s very little way for a stabled horse to judge the passing of time. Nevertheless there are big noticeable events that predict the end of being trapped! When we hear the announcement “ladies and gentlemen, please fasten your seatbelts as we are about to commence our descent into Singapore Changi Airport” we feel elated and relieved our ordeal is over (until we get on the 12 hour flight to Auckland next morning). Similarly, the horse hears the first car of the day arrive – and may greet it with a loud whinny. And like us getting on the plane to New Zealand, they’ll do the whole thing again next day (but also the day after, and the day after). It’s even worse for horses who are stabled all the time – winter time turnout rules, or competition horses.

Here’s an interesting thought. Place humans in conditions of sensory deprivation (this can simply be conditions of very low stimulation such as just sitting in a room with no external noise and low unchanging light levels) for any length of time and there will be a variety of rebound effects when they get out. They report increased anxiety, sensory illusions or hallucinations. One of the most frequently reported after effects of periods of even quite mild sensory deprivation is a temporary increase in the sensitivity of our vision, hearing, taste, and sense of smell and touch. Yet we leave our horses in stables for many hours, then take them out and expect them to be calm and obedient.

Horses need to eat on the move, interact with other horses, walk around and interact with the world while moving not just because they need exercise, or they need grazing. They need it in order to have an understanding of their place in the world, of time passing: they need it in order to be horses. Not many of us would willingly take a 12 hour plane flight every single day (no matter how good the airline food), yet we are happy to spend 12 hours working, walking, playing and eating – interacting with the world – without even thinking about the same length of time passing. Our horses would like the same option, we need to be more creative in working out ways of offering it to them.